"One Year in Colorado"

While I was making the previous film, Life Above 5,000ft: Colorado + Utah 2015, a family member suggested that I should move to Colorado. In September 2015, I moved to the Denver metro area. After settling in for a few months, I began to look at the mountains with renewed curiousity.
Exploring Colorado's Landsapes
Something about landscape photography: "You won't know, until You Go". Meaning: Maps, photos from other people, and social media cannot tell you exactly if and when any given location is going to produce a dramatic image. "One Year in Colorado" represents many scouting trips, an exploration of the dramatic and varied landscapes of Colorado near Denver. Often in 2016, I explored the route from Denver to Fairplay, along Colorado route 285, including Mt. Sherman, Jefferson Lake, Staunton State Park, Guanella Pass and the Lost Park wilderness. 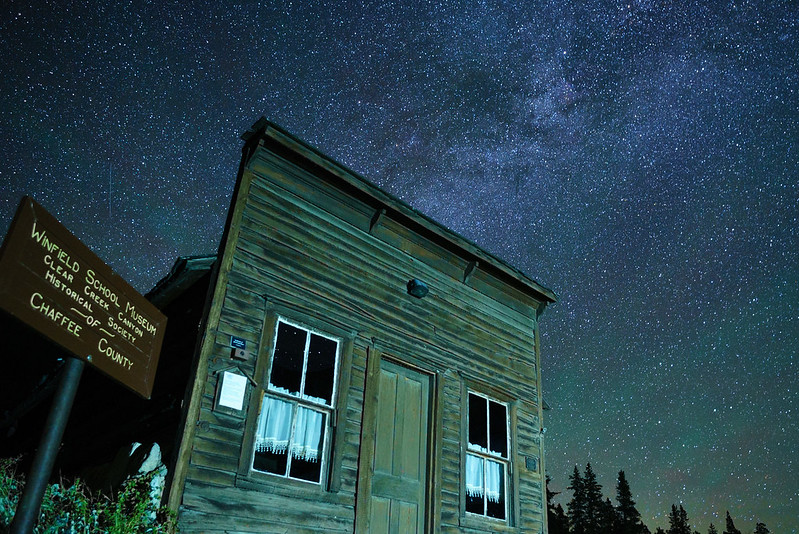 Winfield Ghost Town School Musueum, with Milky Way + Airglow
Overnight at Winfield Ghost Town
In mid-summer 2016, I spent the night at Winfield Ghost Town, an abandoned mining settlement in the White River National Forest. Winfield is not far (as the crow flies) from Aspen, but on the less-fortunate side of Independence Pass, which is closed in winter. Sometimes, ghost towns can be scary, but Winfield didn't feel that way. Normally I'm alone in the wilderness, but other campers were nearby on this occasion. Winfield is 18 miles down a dirt road, but there are public, National Forest camping spots along the route, and at the ghost town itself. I did a late night Milky Way astro timelapse of the School Museum, using a modified LED to light the front of the building. The next day, I went towards Independence Pass and captured the incredible view from the road. 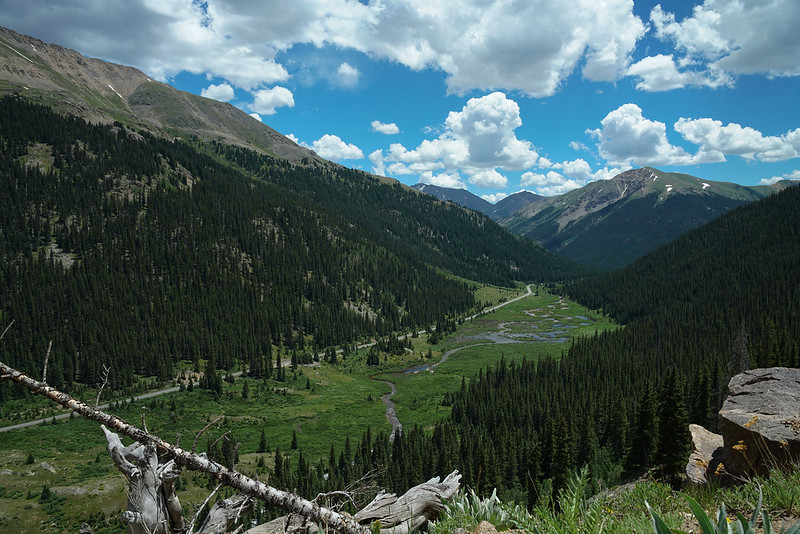 Independence Pass, near Aspen, Colorado
Meteor Photo makes the Evening News
Matt Makens of KWGN Denver Television was kind enough to share my photo of the August 2016 Perseid meteor shower on the news broadcast. It was an exciting moment for me as a photographer and artist. This helped inspire me to complete this project.
Gaining Confidence with Drones
In 2015, I used a larger drone, the DJI S900, carrying a Panasonic GH4, but this takes more time to set up, and takes up much more room in my vehicle. For this project, I took the more portable and convenient Phantom 3 Pro drone with me everywhere, and used it often. Working with a Phantom 3 Pro for an entire year, has increased my confidence and skill with drones in general. I didn't have any serious issues operating the drone, although I did have have one close call avoiding a tall pine tree near Guanella Pass Road, which was captured on video.

"hey, I think I'm doing to run into that tree"

Denver Night-to-Day Timelapse at Speer Ave
There's a somewhat famous view, at the intersection of Speer Avenue and Zuni Street. It's well-known by the Denver news media. I went to this location four different times, trying to get the best night-to-day timelapse of the City of Denver. Once I got a room in a nearby hotel for easier access. For a night-to-day timelapse, you must start about 45 minutes before sunrise time. Denver is growing quickly, at least one additional tall office building has been finished, and the view from the film is already slightly different. 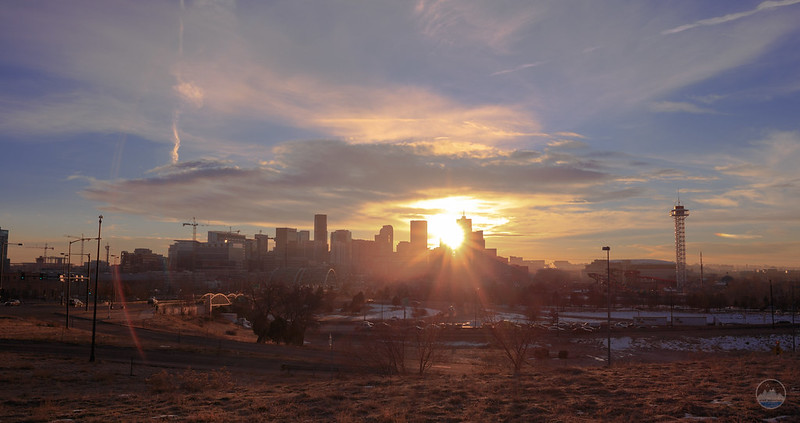 Denver Sunrise at Speer
October at Guanella Pass
In September 2016, I realized I had a collection of shots appropriate for a Four Seasons type of film. One of the last trips of the film was an incredibly productive night and morning at the crest of Guanella Pass. I worked almost all night, capturing a Milky Way timelapse that included Airglow, ice and snow, as well as a scene of snow-covered Mt. Bierstadt, a site well known to Denver's hiking enthusiasts. The next morning, after a short rest, I flew the Phantom 3 Pro drone over the snow covered hills. 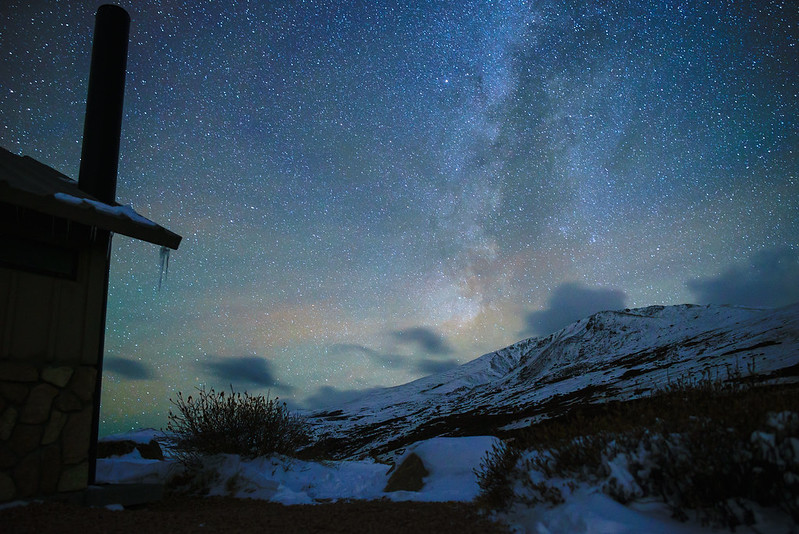 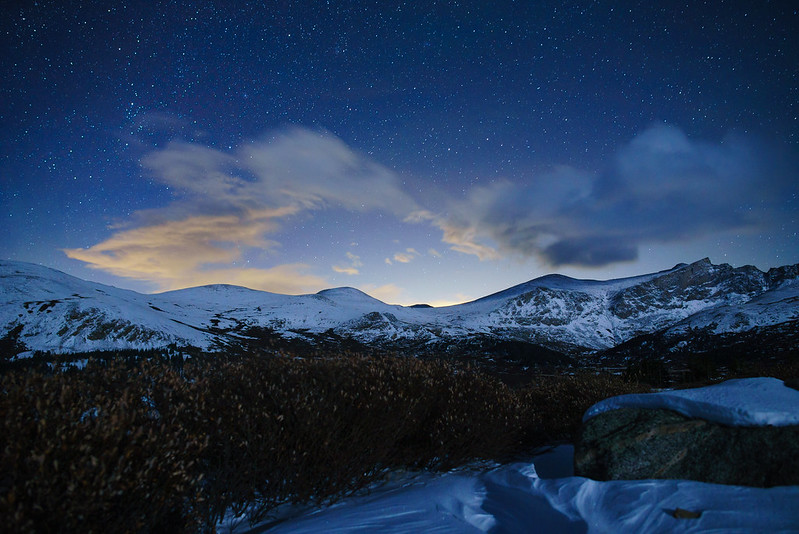 Mt. Bierstadt from Guanella Pass
Here's a set of photos on Flickr for "One Year in Colorado".

Life Above 5,000ft: Colorado + Utah 2015
One entire month of filming in Western Colorado, with occasional trips into Utah; captured with two drones, and two timelapse cameras.